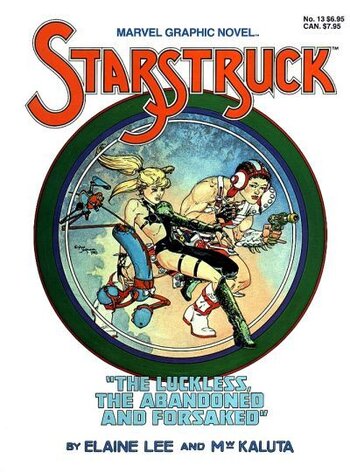 It parodies Space Opera with a healthy mixture of Soap Opera and is set in "Anachera", a time period where humanity has taken to the stars and no particular power bloc holds sway, although recently the Great Dictator has died. At no point does the narrative spoonfeed its audience, expecting it to keep track of the various allusions, plot twists and multiple layers of meaning. Apart from that, it has a dense visual style.

The Great Dictator has fallen and a power vacuum has sparked a galactic chess game of eccentric schemers vying for control of the universe. The stories follow Captain Galatia 9 and her running partner, Brucilla the Muscle, as they have madcap and surreal adventures in between the galactic civil war.

Elaine Lee played Galatia 9 in the stage play, with her sister Susan Norfleet Lee playing her pilot, Brucilla the Muscle, and Michael Wm. Kaluta was in charge of the art direction. When it transitioned to comic books, Lee wrote and Kaluta drew the issues. It was first published as Marvel Graphic Novel #13 in September 1984, with the story titled Starstruck: The Luckless, the Abandoned and Forsaked. This was spun off into a six-issue mini-series published by Epic Comics in 1985-1986. In 1990, four more issues were published through Dark Horse Comics. In 2009, IDW Publishing revived the comic, republishing the original graphic novel and mini-series. In 2013, a new mini-series was crowdfunded and in 2017, it was published through IDW called Old Proldiers Never Die.