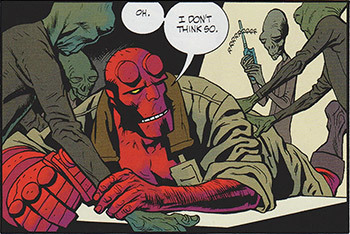 Greetings, Hellboy. We have traveled millions of light years to explore new planets, and now we seek to explore Uranus!
Alien 1: Couldn't we, at least, abduct their political and religious leaders, instead of just any idiot in a pickup truck?
Alien 2: I'm sure the Great Leader has his reasons.
Alien 1: Well, I'm sure the Great Leader is just some sort of twisted ASS FREAK!
— The Kids in the Hall
Advertisement:

More often than not, humans taken on board a spaceship against their will are subjected to grueling tests and experiments by their Strange Captors for intended purposes ranging from studying foreign biology, researching the prospects of interbreeding, and monitoring for long periods of time via tracking chip implants.

Naturally, the trope can be used to great effect to either showcase the sheer horror of or, more frequently, use Vulgar Humor to explore the total absurdity of the nature of Alien Abductions; it can also be a novel way of fitting jokes about gay sex (abductees depicted as being subjected to this are much more frequently male) and rape into a story or work.

The Science Fiction equivalent to a cavity search.

Be on the lookout as well for puns about space programs launching probes to Uranus.

See Also: Ass Shove, Vulgar Humor, Double Standard: Rape, Male on Male; Half-Human Hybrid and Mars Needs Women which are both popular motivations for one kind of alien probing or another. This trope is practically synonymous with The Greys and is often evident whenever Aliens Are Bastards, especially if the probing doesn't appear to have any real significance apart from torturing the abductee.

What else am i supposed to say

What else am i supposed to say