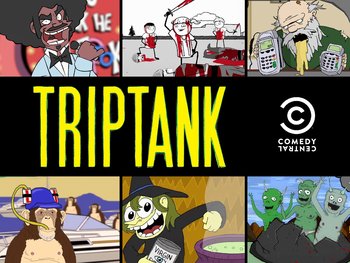 TripTank is a animated sketch comedy series produced by ShadowMachine that premiered in 2014 and airs on Comedy Central.

No real theme to the show other than animated shorts in different styles that, par for the course of the network, either deal with satire, Black Comedy, Gross Humor and generally Crossing the Line Twice. Think South Park crossed with the recent televised version of MAD (the Cartoon Network one, not MADtv) and you pretty much get the gist of it.

Spawned a Spin-Off in the form of Jeff & Some Aliens.

TripTank has the following tropes: