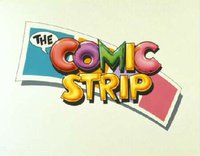 C-O-M-I-C, S-T-R-I-P!
The Comic Strip was a 1987 Rankin/Bass Productions Animated Series which ran for one season, 65 episodes in all. This was Rankin/Bass's last television series before it went into dormancy.
Advertisement:

The premise: four different cartoons (with different animation styles) were shown in rotation sequence, with two of the four appearing in roughly 12-minute slots per 30-minute episode. An animated variant of the live-action Wheel Program, essentially.

The four cartoons were:

The series as a whole shared many of the same cast and crew with the ThunderCats and SilverHawks series, being the second series to be made in the wake of ThunderCats's popularity, after SilverHawks.

Not related to, or to be confused with The Comic Strip Presents.

A clip of the show's intro can be seen here

Tropes present in The Comic Strip: