Western Animation / The Country Mouse and the City Mouse Adventures 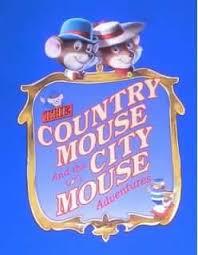 Wherever there's adventure, you'll find these two cousins there.
A Canadian/French cartoon from Cinar and France Animation that ran on HBO from 1997-1999, concerning two anthropomorphic mice cousins named Emily and Alexander, who travel all over the globe to visit their foreign cousins and said cousin's human child friend, and help them solve problems that said friend and their family are dealing with, as well as problems brewing in their own mice society, often caused by their arch nemesis, No-Tail No-Goodnik.