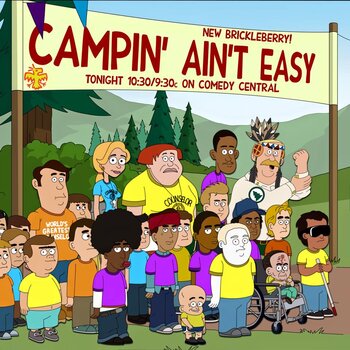 "All the counselors hate the waiters
And the lake has alligators
And the head coach wants no sissies
So he reads to us from something called Ulysses."
— Allan Sherman, "Hello Muddah, Hello Fadduh! (A Letter from Camp)"
Advertisement:

Summer camps in fiction are usually run like the company from Dilbert. The environment seems to be sentient and out to get you (mosquitoes chase you across camp, perfectly-timed inconvenient rain and so on). The food is as bad as cafeteria food. In sports, there's a handful of super-jocks who treat it as Serious Business and reduce everyone else to terror. Arts and crafts are so boring you want to be back in school. The bathrooms are outhouses that require a full nature hike to reach. The teenage counselors are either awesomely stupid and actually take the "camp spirit" and "camp traditions" seriously (often bordering on Pointy-Haired Boss), or treat the camp as their own personal vacation spot with the campers' welfare as an afterthought, or in some cases are out-and-out bullies who sadistically terrorize their younger charges. Usually, though, there's at least one counselor who tries to make some of the awkward kids feel better.

Usually, boredom drives all the campers to insanity (if they weren't that way to begin with, as the hero's bunk-mate always seems to be). The only fun they have is messing with each other, leading to an Escalating War in no time (and brutal hazing if some of the kids are new). If the camp is co-ed, the kids will all wind up with crushes on each other that serve as an object lesson in how Love Makes You Dumb (and nobody ever manages to hook up).

Despite all this though, the students and counselors will always band together at the end of the summer to take on their hated rivals: the affluent summer camp across the lake. There will be a competition of physical challenges that pits the poor underdog campers against the rich arrogant campers, which the underdog camp will win, or take down to the wire, thanks to a combination of what they learned over the summer and their own unique talents that they thought made them weird outcasts.

In older stories, the camp was always some outdoorsy place with a fake-Native American name (for American camps, at least). Modern stories are more likely to have a specialized camp (like weight-loss camp), which is just as awful as the old camps.

Unlike the Boarding School of Horrors, these places tend to be played for laughs. Compare Horrible Camping Trip. See Fat Camp for a more specialized type of summer camp.