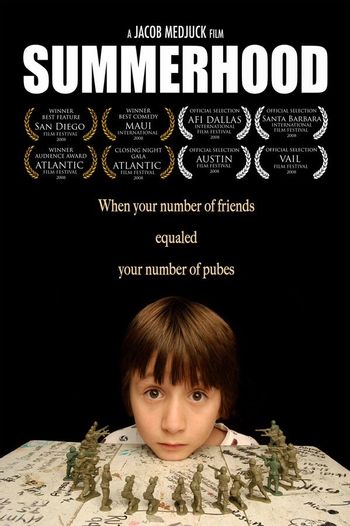 Age of Summerhood (originally just Summerhood) is a 2008 Canadian independent comedy-drama film directed by Jacob Medjuck. It tells the story of 9-year-old "Fetus," following all his trials and triumphs in one summer at sleepaway camp. The film won several awards at independent film festivals, and was eventually given a wider distribution in 2013; it is now available on Netflix Instant.

The film has been praised for its sensitive, honest look at childhood and the social and emotional rites of passage that come in early adolescence. The precocious Fetus takes part in group pranks, gets in trouble with the camp's disgruntled assistant director, sometimes has spats with his savvier friends, ponders life, and admires his beautiful pen pal "Sundae," with mixed results. Few of the characters are ever referred to by their real names. The whole movie has a slow-paced, surreal, slightly magical atmosphere, and is much more polished than most people's ideas of independent film. John Cusack, as adult Fetus, provides retrospective narration.