Film / The Adventures of Barry McKenzie 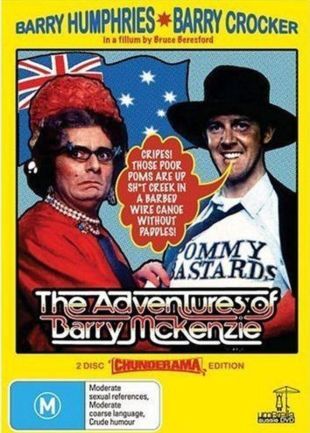 The Adventures of Barry McKenzie is a 1972 Australian comedy directed by Bruce Beresford, starring Barry Crocker and Barry Humphries, and based on characters created by Humphries for a comic strip in Private Eye magazine. The film tells the story of Barry "Bazza" McKenzie (Crocker), an Australian Lower-Class Lout who travels to the UK with his aunt Edna Everage (Humphries), where he gets drunk, ripped off by sleazy television and record producers and religious charlatans, and insulted by pretentious Upper Class Twits, among other shenanigans.

It was the first Australian production to earn over A$1,000,000 in ticket sales. A sequel, Barry McKenzie Holds His Own, was produced in 1974.