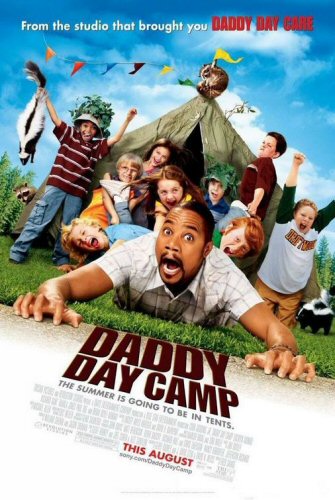 Yep, his career is pretty much screwed.
Advertisement:

Charlie Hinton and his best friend Phil (now played by Paul Rae), still running the day care center from the previous film, take their sons to the summer camp from their youth, Camp Driftwood, only to find it dilapidated and facing foreclosure. The neighboring Camp Canola, run by Jerkass Rich Bastard Lance (Lochlyn Munro), wants to buy the property. Charlie and Phil decide to buy the camp and raise enough revenue to save it within a month by having the kids from the day care center attend it.

When Lance challenges Camp Driftwood to an Olympiad and boasts that they can never win, Charlie's Drill Sergeant Nasty father Col. Buck Hinton (Richard Gant) is called in to raise the kids cadet style so they can beat the Canola kids at the Olympiad. Tension is raised between Charlie and Buck, to the point where Buck leaves the morning of the Olympiad so that the Driftwood kids refuse to participate after he hears Charlie badmouthing him, but then they reconcile and he comes back just in time. At the Olympiad, despite the Canola kids' cheating tactics, the Driftwood kids win. Camp Driftwood gets dozens of applications, and it is saved.