Literature / The Summer Is Ended And We Are Not Yet Saved 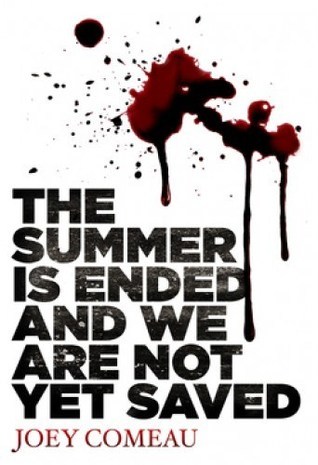 A horror novel written by Joey Comeau, author of A Softer World and Lockpick Pornography, The Summer is Ended and We are Not Yet Saved is an expanded version of Comeau's earlier novella Bible Camp Bloodbath.

Martin and his young, excitable, but loving single mother have a rough existence: Martin's a little odd, obsessed with cleanliness, and has trouble making friends, while Mom works multiple steady but boring jobs to support them, leaving her with little time to spend with her son and forcing her to put off her dream of being a special-effects makeup artist for the gross, over-the-top horror films both she and Martin love. When Mom has a chance to go to Toronto and work on a real Slasher Movie, the only problem is what to do with Martin for the summer. To give his mom the chance to follow her dream, Martin reaches out to his estranged grandparents and begs them to send him to Bible Camp for the summer.

Martin is a Fish out of Water at Bible Camp: he gets along better with the girls across the lake than the boys in his cabin, and he doesn't really understand all the Jesus talk. But there are lots of new people to talk to, and lots of fun stuff to do, and after all, it's for his mom. She's given up so much for him. Surely he can tough this out for her.

But then the killings begin.

And Martin, who knows everything about slasher movies, must find a way to live through one.

The Summer Is Ended and We Are Not Yet Saved contains examples of: