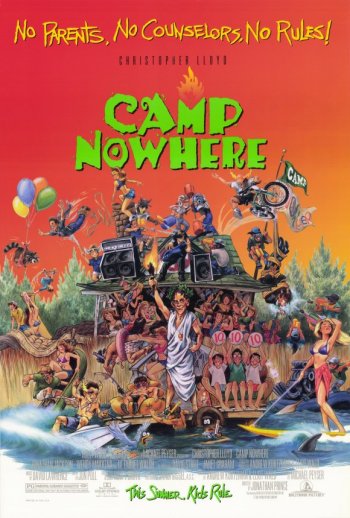 It's actually for kids. No, really.
Advertisement:

Camp Nowhere is a 1994 comedy about a kid-run summer camp, directed by Jonathan Prince and starring Christopher Lloyd.

Every year, junior high schoolers Mud, Gaby, Zack, and Trish are sent to summer camps their parents choose for them, but they hate: computer camp, fat camp, military camp, and drama camp, respectively. So, they decide this year is going to be different, and they are going to go somewhere they can be kids and have fun: A camp with no parents, no teachers, no camp counselors, and no rules.

Out-of-work actor/drama teacher Dennis Van Welker (Lloyd) owes back payment on his car, and a debt collector is on his trail. Said debt collector is retiring, and wants to do so with a perfect record. Dennis, in turn, has to find some way to hide and/or come up with the cash.

The four junior high kids hire Dennis to pose as the lead counselor for each of their camps, while convincing their parents that they cannot visit. Word about the plan gets out to the whole school, and before long many more kids have signed up. All the kids have fun, doing things they never would have been able to do with adults watching, but it soon becomes difficult to keep the camp a secret...

Notable as the film debut of Jessica Alba, who appears as one of the campers.