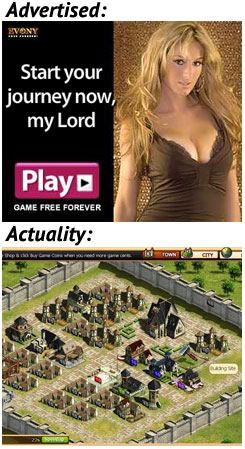 Where the hell are you, my Lady?
(Not pictured: spyware program)
"SHE IS ACTUALLY IN OUR GAME, MY LORD"
— Alteil ad's Take That! at this trope

The practice of putting sexy women on the box art and in advertisements for video games without her actually appearing in the game, or only appearing in a very minor, forgettable role that doesn't warrant such front-and-center visibility. Sex Sells, logic be damned. It can be seen as especially odd if the game features several significant female characters who could have been used instead, but it doesn't really matter who the girl is. She is there only to attract the Male Gaze, due to the assumption that most gamers are (heterosexual) men. Once he sees what the game is about and decides whether or not to buy it, her job is done.

A rather blatant subtrope of Sexy Packaging and Covers Always Lie. The name is a reference to "Sir Not-Appearing-In-This-Film" from Monty Python and the Holy Grail.

This trope is a recurring feature of Clickbait Gags, specifically when mocking the trend to put attractive women in YouTube thumbnails. Contrast Sir Not-Appearing-in-This-Trailer, as movies tend to have the exact opposite problem. See also Wolverine Publicity.

For ladies who do appear in the game, go to Third-Person Seductress.

Has nothing to do with characters who were Dummied Out.

Other
Anime and Manga