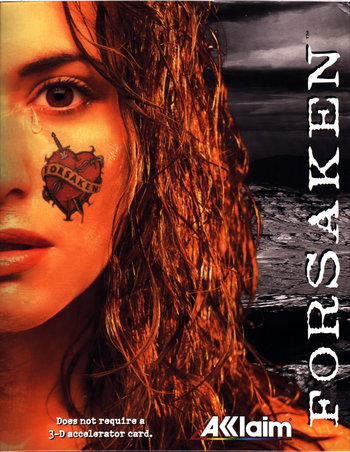 The future is Forsaken.
Advertisement:

Forsaken is a "Six-Axis" First-Person Shooter published by Acclaim in 1998. The PlayStation and PC versions of the game were developed by Probe Entertainment, while the Nintendo 64 port was developed by Iguana Entertainment. A remastered version combining the PC and N64 campaigns along with adding the expected modern graphical features was released for PC and Xbox One in 2018, by Nightdive Studios.

In the distant future, a subatomic experiment causes an uncontrollable fusion reaction, leaving the surface of Earth destroyed. A year later, Earth has now been classified as condemned by the government, which leaves Earth open for salvaging, leading mercenaries to battle each other, as well as robot sentinels left by the government for what ever may remain on the husk of a planet.

Not to be confused with a Pokémon fanfic of the same name.