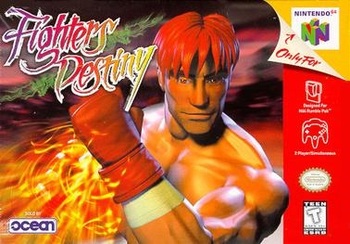 Fighters Destiny (Fighting Cup in Japan) is a 3D fighting game developed by Genki for the Nintendo 64, distributed in Japan by Imagineer and overseas by Ocean Software, released in 1998. It is an unconventional fighting game: rather than the tried and true format of best two-out-of-three rounds (won by the first fighter to fully deplete the opponent's health), Fighters Destiny utilizes a scoring system much like real-life martial arts tournaments: fighters score points depending on certain actions performed, such as knocking down the opponent, performing a ring out, or landing a special attack. By standard, both fighters have a stamina gauge and each round lasts 30 seconds. If one's stamina is depleted, they will enter a state known as "Piyori" (stunned) and become open for a knockdown blow. If the 30 seconds pass and neither fighters have gained points, the round goes to judge's decision, and the point is awarded to whoever fought better in that half-minute. First one to seven points wins the fight.

While this all sounds complicated in theory, in practice, this means that a fight can last pretty quickly if you're good enough - by default, knockdown blows are worth 3 points and successful special attacks are worth 4, so you can literally win in just two strikes. But then again, you can customize the rules to your heart's content, changing how much each scoring method is worth, how many points will the match be worth (even making your whole game a succession of sudden death matches if you want) and so on.

Despite this innovative system, Fighters Destiny received mainly mixed to positive reviews upon release, and the fighting game community at large tends to overlook it, possibly due to a combination of factors: the lack of creativity on character designs (Ryuji is pretty much a shirtless, redhead Ryu, for starters), the fact that it was exclusive for N64 (a system notorious for not being big on quality fighting games) and the fighting system itself ('cause some people think it's more fun to beat the crap out of someone until they die of it than the possibility of winning with one well-placed punch, never mind the fact that this is what usually happens in real fighting tournaments).

The game got a sequel in 2000, Fighter Destiny 2 (Kakutō Denshō ~F-Cup Maniax~), which didn't bring much in the way of innovation, except for a few new characters (though most of them were Moveset Clones of characters of the first game) and more polished (if rather garish) graphics.

A more detailed rundown of the series can be found here

Not to be confused for Data East's Fighter's History.