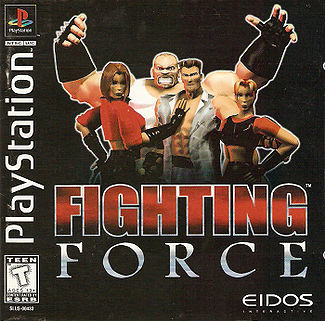 These guys rock! From left to right: Mace Daniels, Ben "Smasher" Jackson, Hawk Mason and Alana Mckendrick.
Fighting Force (also known as "Metal Fist" in Japan) is a Beat 'em Up game developed by Core Design (creators of the original Tomb Raider series). It was released In 1997 for the PlayStation and Microsoft Windows. In 1999, Crave Entertainment released a version on the Nintendo 64. It was intended to be a Streets of Rage game, but ended up being a Divorced Installment. (This also explains why there is no port for the Sega Saturn despite one being planned: either Sega refuses to allow it or Core cancelled it out of spite.)
Advertisement:

A sequel, Fighting Force 2, was released for the PlayStation and the Sega Dreamcast with the only playable character being Hawk. It didn't perform too well.

Another sequel, known as Fighting Force 3, was in development for the Xbox, PlayStation 2, and Gamecube, but got cancelled.