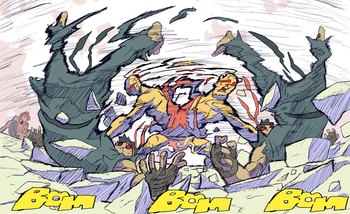 "Have you no sense of defense? Or do you just like to feel pain?"
Advertisement:

A type of attack common in Fighting Games and Action Games. it is usually mapped on a dedicated button or a simultaneous button press (like kick+punch). It is a move that bypasses blocking and often has a lengthy animation of the grabbing character manhandling the grabbed opponent, and usually does fixed damage.

In fighting games, it is used to punish blocking opponents, but some games have mechanics that allow them to cancel the grab move and save themselves a world of hurt. In action games, it is often used to initiate Action Commands, but sometimes is just a way to do a good amount of damage, some games even have this as an Invulnerable Attack.

In some games, like Beat 'Em Ups, objects can be grabbed and thrown at enemies instead. Usually these games also allow you to throw enemies at other enemies in the same manner.

The grab part here is the only uniform part of the trope. Many characters often have a multi-hit grab move that traps an enemy in an series of attacks that sends them flying at the end for the "throw" part. Others have the grab as a part of a combo, like say, a punch combo that finishes with a Facepalm of Doom which if connects, will make the character slam the grabbed opponent in the ground. In other words, "grabbing" means any attack that traps the enemy into an "automatic" series of attacks, which can sometimes be strengthened with Button Mashing, depending on the game.

Note:This is an Omnipresent Trope in Fighting Games, list only notable examples; i.e., examples that go beyond just "grab enemy for fixed damage".

Compare Unblockable Attack, which is Exactly What It Says on the Tin, but does not involve grabbing and throwing an enemy. Compare Personal Space Invader, for enemies that can grab you. See also Invulnerable Attack, which this one can overlap with.