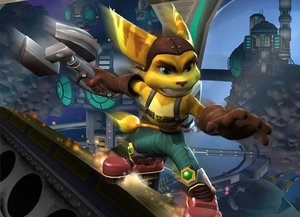 "Rumors circulated for a brief time that someone had invented a device called 'Grindboots' that would somehow allow users to slide along thin narrow rails at high speeds. After further investigation, we do not believe any such device ever existed."
—Description of the Grind Boots, Ratchet & Clank (2002)
Advertisement:

Ever try grinding a rail on a skateboard? It is as hard as it looks. But not as hard as grinding one without a board. Despite this a surprising number of characters are able to do just that. Harnessing the power of gravity to surf down well placed rails at high speed like a makeshift roller coaster, rail grinding allows a character to move faster than their normal running speed though only in the direction of the rail possibly serving as a shortcut between areas. Sometimes they don't even need a rail, they can grind just as well down any slope.

Extra style points for shooting at the same time.

Named after the equipment from Ratchet & Clank that allows the main character to grind rails.

Having been the inventor of the Rail Slind, Tennessee's cowboy boots evokes the design of the grind boots trope.

Having been the inventor of the Rail Slind, Tennessee's cowboy boots evokes the design of the grind boots trope.