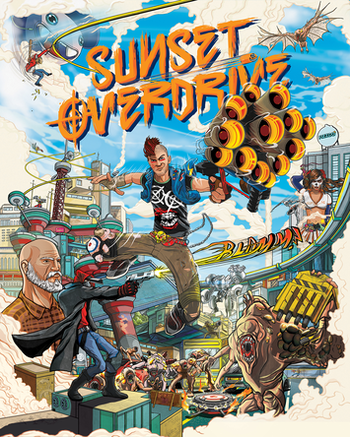 Welcome to the awesomepocalypse.
Okay, here's the situation: A contaminated energy drink has turned everyone into mutants. There are survivors, doing whatever they can to get by. And some are dicks, attacking others for their stuff...but it's not all bad. All this place needs is a hero! One who doesn't just survive...but does it with style! Who is this hero? ME!...n-not me? Oh. YOU! Can you survive the many dangers? Can you help others survive? Can you save Sunset City? Can you?! FOR THE LOVE OF GOD, CAN YOU?!?!
Advertisement:
...of course ya can. It's a fuckin' video game!

Sunset Overdrive is an open-world Third-Person Shooter developed by Insomniac Games. It takes place in Sunset City, a locale that suffers from a mutant outbreak after the nefarious company Fizzco releases their energy drink, Overcharge. You play as a highly customizable character who eventually takes the turn of events in stride, moving around the city and destroying mutants with glee.

Gameplay is reminiscent of Ratchet & Clank with Le Parkour thrown in for good measure. Referred to as "traversals", you are able, and highly encouraged, to run on walls, grind on rails, and use various objects to hurtle yourself upwards in your quest to escape the city. As you might expect from an Insomniac game, the weapon selection is out there, as your arsenal can consist of a bowling ball launcher, vinyl record gun, toy helicopters with pistols attached to them, and teddy bears strapped with dynamite.