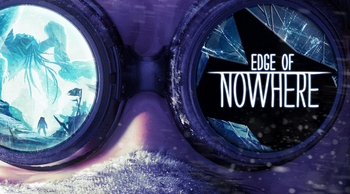 Edge of Nowhere is a third-person Survival Horror game developed by Insomniac Games for the Oculus Rift. It gets many of its themes from the Cosmic Horror Story, especially H. P. Lovecraft's novella At the Mountains of Madness.

The main character, adventurer Victor Howard, is searching for his fiance Ava Thorne, who ran into trouble on an Antarctic expedition. Howard's plane crashes in the snowy mountains, and he must battle the treacherous Antarctic conditions, a strange race of alien creatures who live in caves beneath the ice, and the slow loss of his own sanity.

Edge of Nowhere was released June 6th, 2016, and was one of the first full-length, story-driven games made for virtual reality.

Edge of Nowhere provides examples of: