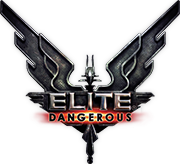 Elite: Dangerous is the long-awaited fourth game in the Elite series by David Braben and Frontier Developments. The game was announced in 1997 as Elite: IV, but the dying space simulator market combined with a lack of funding for the game ensured that it remained Vaporware for 15 years, before getting funding via Kickstarter in 2012 and finally releasing for PC in December 2014. The game has been made available on the Apple Macintosh, Xbox One, and Steam, with a port for the PlayStation 4 slated for early 2017.

An expansion, Elite Dangerous: Horizons has also been released. It is the first of a set of planned expansions that involves, among other things, the ability to land on and explore planetary bodies. Horizons allows players to land on airless worlds and launch from their ships into a Cool Car designed to explore these planets' surfaces, utilize a sort of Elemental Crafting system to change how their ships' systems work and perform, and launch from larger ships into a Space Fighter; and will also allow players to serve as crew members on other players' spaceships and give players the ability to fine-tune how their ingame characters look. Another expansion, Elite Dangerous: Beyond was revealed in 2018 and is being released in several "chapters" (aka, major patches) for free to all owners of the base ED game. All 4 chapters have since been released, bringing a multitude of different additions and changes. Updates in 2020 will include player-owned fleet carriers, the ability to fly and land on atmospheric planets, and eventually the ability to walk around ships, space stations, and atmospheric planets with handheld weapons (known in Frontier nomenclature as "space-legs").

The game is the first Elite game with any sort of multiplayer functionality, in the form of being a semi Massively Multiplayer Online Game with options for "open play" where players can encounter other players like a regular MMO, private groups where you can just play with chosen friends and not have to deal with other random players, or an online-only solo mode where you'll only ever encounter NPCs. Cross-platform play is not supported, but all platforms interact with the same "Background Simulation" which drives the galaxy behind the scenes; thus, players across all platforms can have a limited degree of influence on one another even if they cannot directly interact via combat, trading, piracy, or similar encounters.

The game takes place in the Milky Way Galaxy 1286 years from now, starting approximately 47 years after the third Elite game, Frontier: First Encounters, and true to its Tagline, the galaxy features the 400 billion stars thought to exist within our Galaxy, 150,000 of which are based on actual astronomical data and the other 399,999,850,000 being created through Procedural Generation. It also features the return of the Galactic Federation, the Empire of Achenar, and the Alliance of Independent Systems from the previous games, as well as hundreds of smaller factions within each of the three superpowers and the faction that player-commanders belong to, the Pilots' Federation.

Elite: Dangerous' gameplay is similar to the other games in the Elite series, with players starting out with 1,000 Credits and a Faulcon deLacy Sidewinder with the goal of reaching the coveted Elite ranking through trading goods, exploring the galaxy, and collecting bounties. Unlike other Elite games, however, there are three additional fields to reach the ranking in alongside the traditional field of combat: trade, exploration, and CQC. Also unlike other Elite games, Dangerous features the ability to influence faction standings within a star system, which if enough influence is reached, can result in a major shift in that system's loyalties, whether it be a Federation system seceding to the Empire (or vice versa) or an independent system aligning with the Alliance. Also unlike other Elite games, the game features an incredibly meticulous amount of attention to detail. Players can look around the cockpit of the ship they're flying, space stations have NPC traffic alongside player traffic, starfields are accurate to the player's position in space (no Streaming Stars here!), and black holes (yes, you can encounter black holes in Elite: Dangerous) feature gravity lensing. There is also an underlying story to the game accessible via an in-game news service featuring political clout within the Space Cold War between the Empire, the Federation, and the Alliance as well as some mysterious events pointing to the legends of the Thargoid race being more than just legends...