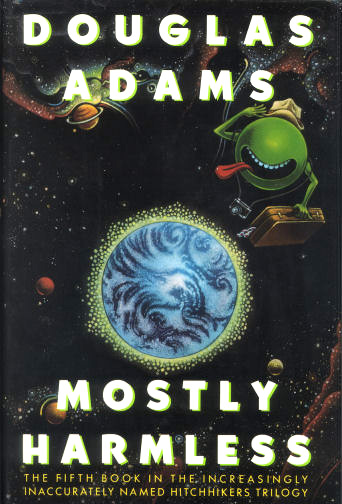 Mostly Harmless (1992) is the fifth installment in the increasingly inaccurately-named The Hitchhiker's Guide to the Galaxy trilogy, and the last written by franchise creator Douglas Adams himself. Set several years after the fourth one, So Long, and Thanks for All the Fish, its plot divides into three distinct branches. The first concerns the series protagonist, hapless Englishman Arthur Dent, as he tries to find a new, Earth-like home to settle down on after the unexpected erasure of his soul-mate, Fenchurch; he eventually builds a sort of life for himself as resident sandwich-maker for the primitive villagers on the planet Lamuella (but not for long).

The second concerns Ford Prefect and his ill-conceived attempts to save the Guide Corporation from corporate sleaze Vann Harl and Infini-Dim Enterprises, a bureaucratic nightmare run by the Vogons that wants to pervert the spirit of The Hitchhiker's Guide to the Galaxy for profit. The third concerns Trillian, who reinvents herself as an interplanetary anchorwoman and bears Arthur's child, Random Dent, who is absolutely nothing like her mild-mannered father.

This book is by far the darkest of the series, which had hitherto been very upbeat, due to a bad case of Creator Breakdown.

Preceded by So Long, and Thanks for All the Fish. Succeeded by And Another Thing.... Has next to nothing to do with the Connecticut sketch comedy Mostly Harmless, but is definitely related to the Mostly Harmless Roleplay LJ group.