Literature / So Long, and Thanks for All the Fish 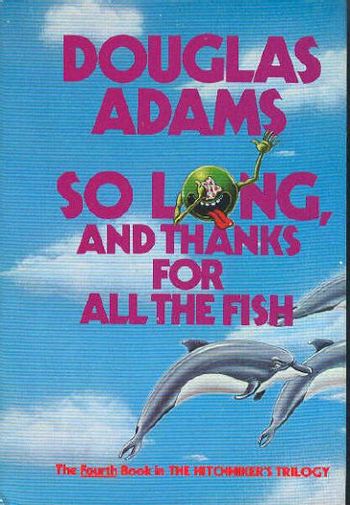 ...So sad that it should come to this
We tried to warn you all, but oh dear...
Advertisement:

So Long, and Thanks for All the Fish (published in 1984) is the fourth installment in the increasingly inaccurately-named The Hitchhiker's Guide to the Galaxy Trilogy; it's set eight years since the beginning of the first book, but the amount of time that has passed between the end of the third, Life, the Universe and Everything, and the beginning of this one is not made clear. The plot concerns series protagonist Arthur Dent, who is very surprised to discover that his homeworld, planet Earth, seems to have suddenly sprung back into existence even though the alien Vogons destroyed it eight years ago to make way for an interstellar bypass.

He explores his old Islington home and, seeing everything back where it should be, starts to suspect that his memories of space travel may have been nothing more than hallucinations; after all, the people say, a nearby water source was found to be accidentally contaminated by hallucinogens. Arthur returns to his old ways and even strikes up a meaningful romance with Fenchurch, a beautiful young woman who seems just right for him. However, something is not quite right. Every dolphin on Earth seems to have mysteriously disappeared, someone is going around anonymously giving out fishbowls as gifts, and Fenchurch herself is hiding one or two oddities. Eventually Arthur and Fenchurch set out on a quest to discover the truth, leading to encounters with Ford Prefect, a giant robot "invader", and Wonko the Sane...

Notable for featuring God's Final Message to His Creation.

Preceded by Life, the Universe and Everything. Succeeded by Mostly Harmless.

So Long, and Thanks for All the Fish provides examples of the following tropes: