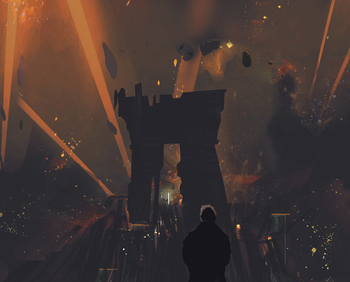 Tannhäuser (pronounced TUNN-hoiz-er, or ˈtanˌhɔʏ̯zɐ) was a German poet and Minnesänger whose poetry dates from 1245 to 1265 A.D. Outside his poetry, practically nothing is known of the historical Tannhäuser. In the 1400s, legend sprung up that he discovered the underground home of the goddess Venus, then sought atonement from the Pope for having worshiped her. Richard Wagner's three-act opera Tannhäuser und der Sängerkrieg auf Wartburg popularized this legend in the modern era.

The Sci-Fi film Blade Runner gave a brief Shout-Out to Tannhäuser, as Roy Batty mentions the Tannhäuser Gatenote which he pronounced as "Tann-how-zer", ignoring the umlaut—which is often omitted regardless in his climactic speech: "I've watched C-beams glitter in the dark by the Tannhäuser Gate." What the gate exactly is has not been revealed. It became a meme to science fiction geeks anyway.