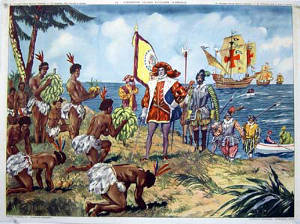 Columbus "discovers" the New World, much to the surprise of those already living there.
"Something hidden. Go and find it.
Go and look behind the Ranges —
Something lost behind the Ranges.
Lost and waiting for you. Go!"
— "The Explorer", Rudyard Kipling
Advertisement:

The urge to explore is as old as Mankind, and in every generation, there are those who feel compelled to explore strange new worlds; to seek out new life and new civilizations; to boldly go where no one has gone before. It's easy to dream, but unknown lands can be dangerous, so only the boldest are willing to live that dream. Tales of these bold explorers are a favorite topic for fiction.

Before history even began, bold explorers (and the settlers who follow them) had reached almost every habitable land on the planet. Our oldest surviving tale, The Epic of Gilgamesh features the bold explorations of Gilgamesh the King, making this Older Than Dirt. In the Age of Exploration, starting in the early Renaissance, Marco Polo (re-)discovered China, Columbus (re-)discovered America, and Magellan found a way to circumnavigate the globe.

Though most of the world is considered explored today, the rest of the universe still beckons, and this is a common trope in both Historical Fiction and Science Fiction. This trope was extremely common in early Interplanetary Voyage stories—some of which actually date back to the above-mentioned Age of Exploration.

Only the bold need apply. Those who, through no fault of their own, are kidnapped to or ship-wrecked on new lands, or who are merely bad navigators, do not qualify, though their subsequent actions may prove them to be examples.

Note that this is such an ancient trope and so very much a case of Truth in Television that there is little to be gained from mentioning Real Life examples, as most people can probably think of dozens. A Historical Domain Character can go under the proper medium.

May overlap with other tropes such as The Pioneer, who is specifically looking for a new home, though it's more usual for pioneers to follow the explorers. Intrepid Merchant is another one that frequently goes hand-in-hand with this one, as new locations often mean exotic goods and new, untapped markets for old products. Sometimes a state-sponsored version of this would be either an Ambadassador or engaged in Cloak & Dagger, likely both. Compare Gentleman Adventurer and Adventurer Archaeologist.