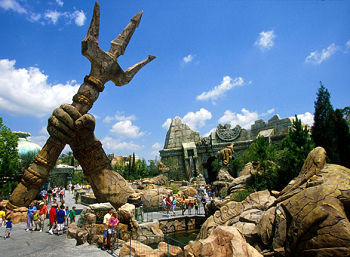 Poseidon's Fury (originally known as Poseidon's Fury: Escape from the Lost City), is a part-show part-walkthrough that is located in the Lost Continent area of Universal's Islands of Adventure. Unlike the vast majority of attractions Universal has put out in the past, this is among the very few to not be based off of an intellectual property. Instead, the attraction is an original creation that takes inspiration from Classical Mythology.

When the attraction opened with the park on May 28, 1999, its story was based around a tour of the Temple of Poseidon, led by an eccentric yet kind old man known as "The Keeper". He begins by weaving the tale of the Greek gods, specifically mentioning a great battle that occurred 10,000 years ago between Zeus and his evil brother, Poseidon. After that, he leads the guests through the temple until things take a different turn when they find themselves transported to the underwater city of Atlantis. There, they are met with none other than Poseidon himself (voiced by Jeremy Irons). Immediately, he reveals his sinister intentions to force the guests into serving as his own personal army that he will use to exact his revenge on Zeus. The Keeper, not willing to let this happen, sheds his human form, revealing himself to be Zeus (voiced by Earl Boen). The two gods engage in yet another battle, and in the end Zeus emerges triumphant as he banishes Poseidon away and transports the guests back to where they started.

Due to low guest ratings, the attraction was given an overhaul in 2001 that, while keeping most of its sets and special effects intact, saw its storyline completely revamped. In the new version, Poseidon now serves as the hero of the attraction, while the role of the villain is given to a new character known as Lord Darkenon (played by Jeffrey Combs). The premise of the attraction was changed to have it be set in the present day, focusing on the "Global Discovery Group", an archaeologist group that's investigating the recently-resurfaced temple. Guests are introduced to Taylor, a geeky young adult who ends up being the one to give guests a tour of the temple when the group's leader, Professor Baxter, disappears under mysterious circumstances. Guests are first given details of how Poseidon and Darkenon became enemies along with the destructive war that erupted between them. After that, much like the original attraction, things start to take a turn for the worse when Taylor accidentally reads a spell that reawakens Darkenon. He traps everyone within one of the temple's secret chambers, only allowing their freedom if they are able to find Poseidon's trident. From here, the story eventually leads up into Poseidon too being reawakened and clashing with Darkenon once more in a huge showdown.

Though not among the park's most popular destinations, the attraction is known well among guests and fans for its impressive use of special effects; its biggest highlight being the "water vortex", a tunnel surrounded by flowing water that the guests walk under to get to the main show room. note Here's a behind-the-scenes look

at how the water vortex works, along with other aspects of the attraction.

Tropes shown in Poseidon's Fury include: