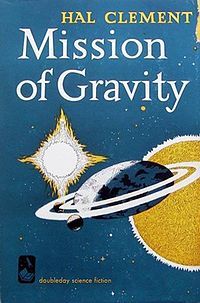 Mission of Gravity (1954), by Hal Clement, is considered to be a classic of science fiction Worldbuilding.
Advertisement:

The scientific expedition has a problem. Their experiment, which is supposed to help them better understand gravitational effects is stuck on the surface of the strange planet Mesklin, where the surface gravity is so powerful humans cannot go down and fix the craft. On the bright side, there is an intelligent race of centipede-like creatures inhabiting the world, and the captain of a seagoing vessel has agreed to embark on a journey to locate the device.

And so our adventure begins.

Barlennan, captain of the sailing ship Bree, and his crew embark on an adventure from the equator of their plate-shaped planet (where the gravity is three times Earth's), to the pole (where gravity is several hundred times Earth's). On the way they will encounter storms, strange creatures, unexpected geography, strange countries and barbarians.

Tropes in Mission of Gravity: