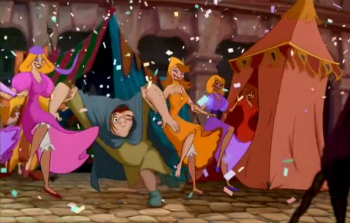 How can they all fit in there? Because they can-can-can!
Advertisement:

No, there is no way all of them could possibly fit into that thing. It is a Clown Car Base.

A common variation in animation and comics is for a character to live in a structure barely larger than himself, but constantly drop hints that it is considerably more spacious than it appears; the actual interior of the structure is never shown.

Primarily a comedy trope. When we actually see the inside of the thing, it is Bigger on the Inside. A variation of Clown Car. See also Space Compression and Clown-Car Grave, a subtrope involving the undead. Compare Units Not to Scale and The Stateroom Sketch. The equivalent trope for containers is Hammerspace / Bag of Holding.