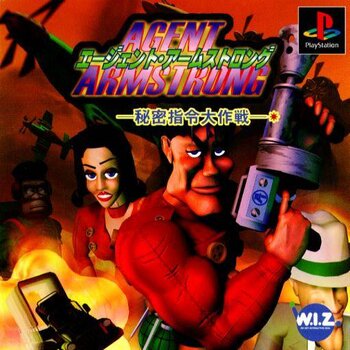 Look at the size of those jowls!
Advertisement:

Agent Armstrong is a 1997 Run-and-Gun action game created for the PlayStation, modelled after classical 90s shooters like Contra and Metal Slug, but also paying tribute to old-timey adventure comics from the 1930s.

The year is 1935... nearing World War II, a criminal organization called the Syndicate, led by the dictator Spats Falconetti, threatens the world's safety with their super-weapons, and its up to the British Secret Service's best asset, Agent Armstrong, to thwart the Syndicate in levels set in jungles, cities, underwater, and a finale in their weapons factory and airborne base.

Agent Armstrong on the Move!