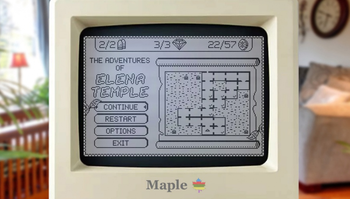 The Adventures of Elena Temple is an indie game developed single-handedly by Grim Talin, and is strongly styled after the 80's Puzzle Platformer games. The player takes control of an archaeologist named Elena that must explore a temple filled with everything from traps and enemies to treasures and armed with only a gun that can only hold and shoot two bullets at a time. The game is not just a puzzle game but also a strategy game, since every level has a certain path of actions to take to clear it easily.

The game's most unique gimmick is that along with being a Retraux game, it incorporates a dozen different interfaces all resembling different game consoles and computers from the era. The filters can be changed at any time and only affect the look of the game. The levels and puzzle are always the same. The game released for Steam and Nintendo Switch in May 2018.