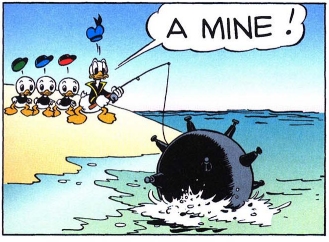 Much more impressive than a boot.
Any ship can be a minesweeper. Once.
Advertisement:

The use of these Naval Weapons is still legal unlike the anti-personnel land-based version, but you are required to notify people of their use and the rough location of them, so civilian shipping can stay out of the way.

Naval mines in fiction are always portrayed as large metal spheres covered with small spike-like detonators which cause the mine to explode on contact with a ship (or any unfortunate individual). This is based on the appearance of early naval mines. Most modern ones look rather different. Some are self-contained launch tubes for a homing torpedo

that launches when it detects the sound of a ship or submarine's propellers (and is smart enough to distinguish between the two, or even different classes and sizes of ship, and may be set to attack either or both). Others are modified aircraft bombs dropped in shallow waters to lie on the sea bed, with sensor circuitry that detonates when they detect the change in magnetic fields created by the ship's metal hull. The horned type, however, remains a favored weapon for shallow waters and low budgets, and like the Cartoon Bomb is easily recognized by the viewing public.

That page picture has a grain of Truth in Television to it, by the way; Just as unexploded ordnance is regularly found on land around the United Kingdom and Continental Europe, fishing trawlers working in the English Channel or the North Sea really do pull live mines, torpedoes and other Second World War-era munitions out of the depths every so often.

After one of his minions allowed the Quests to escape, General Fong angrily shoots him. This ends up being a fatal mistake as the man's body falls onto the detonator for the sea mine Fong's boat was over.

After one of his minions allowed the Quests to escape, General Fong angrily shoots him. This ends up being a fatal mistake as the man's body falls onto the detonator for the sea mine Fong's boat was over.