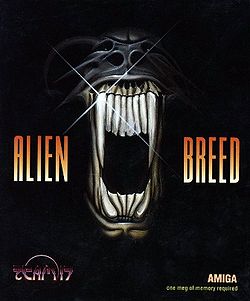 Alien Breed is a series of top-down Shoot Em Ups by Team17, perhaps better known as the creators of the Worms series. The original Alien Breed was released in 1991 for the Commodore Amiga and later in 1993 by MicroLeague for MS-DOS. The game was based heavily - and unofficially - on the Alien films, specifically Aliens, and also on the 8-bit-era games Laser Squad and Paradroid and was compared to Gauntlet and Alien Syndrome. The formula was simple enough. The player(s) controlled a Space Marine on an alien-infested Space Station, attempting to locate elevators leading to lower levels while battling aliens, gathering ammo and money and buying things from store terminals. The style of gameplay, i.e. rampaging from point A to B, was considered a direct precursor to the First-Person Shooter, namely Doom. It was followed by Alien Breed II: The Horror Continues in 1993, Alien Breed: Tower Assault in 1994 (the last 2D entry), Alien Breed 3D in 1995 (in conjuction with Ocean), Alien Breed 3D II: The Killing Grounds later that same year. All were highly praised. A PC/Dreamcast First-Person Shooter sequel called Alien Breed: Conflict was planned, but was eventually canceled.

Fast forward to December of 2009, with the release of the Unreal 3 engine-driven Alien Breed: Evolution on Xbox LIVE Arcade, later released as Alien Breed: Impact on Steam and the PlayStation Network in June of 2010. This reboot of the series stars Joseph Conrad, chief engineer aboard a diplomatic ship called the Leopold. After suddenly dropping out of Hyperspace, the Leopold impacts a far larger derelict spacecraft in a decaying orbit around an uninhabited ice world. With most of the crew dead, it's up to Conrad to find out what went wrong and attempt to rectify the situation. Reviewers praised the game's look but complained "It's the Same, Now It Sucks!," stating it was no different than its Amiga predecessors. A sequel, Alien Breed 2: Assault, was released in September, followed two months later by the final part of the trilogy, Descent.