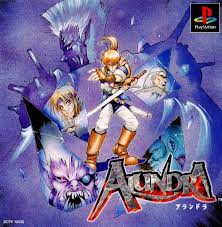 Otherwise known as Adventures of Alundra. Released for the PlayStation by part of the original Landstalker development team (who had previously worked on Final Fantasy III, and would later work on Avalon Code).
Advertisement:

It's an Action-Adventure game that plays similarly to the famous The Legend of Zelda, featuring a Silent Protagonist, lots and lots of puzzles, and a Journey to the Center of the Mind.

The story is about an elf eponymously named Alundra, whose people, called 'Dreamwalkers', have the special power to enter people's dreams. He loves adventuring and that's where we first find him, taking a journey with a ship. When he sleeps on his bed on the ship, he sees a vision of a wise man named Lars who pleads with him to stop the evil demon, Melzas. His destination is a village called Inoa, which Alundra comes across by getting his ship wrecked and being stranded there.

At first, Alundra is welcomed, and he helps many people by using his power to enter people's dreams and saving those trapped in nightmares that actually could kill them. However, soon after, the village suddenly turns on him, leaving Alundra with just a handful of supporters. Things get a bit more complicated when another Dreamwalker, this time an elf girl named Meia, enters Inoa. At first acting like The Rival, Meia is quickly befriended by Alundra as they share the same goal: to destroy Melzas.

Published in the US by Working Designs and in Europe by Psygnosis. There's also a sequel entitled Alundra 2 that has nothing to do with the first game.