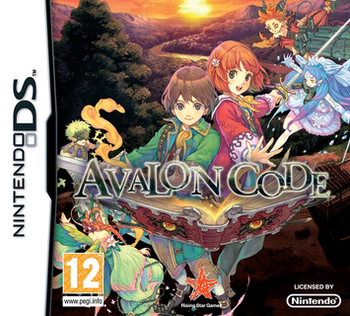 "The world is ending. You must create a new one."
Advertisement:

A 2009 Nintendo DS fantasy adventure game, created by the staff of Matrix Software, published by Marvelous Entertainment, and distributed by XSEED Games.

One bright, cheerful day, your Purely Aesthetic Gender main character decides to take a nap on a hill in the nearby meadow. When they wake up, you find out that the world around you is going to be utterly obliterated by the great god Kullervo, and the only way you can save everything you care about is by hitting them with a magic book. But, of course, that's just the opening cutscene. The story in this game is rather fleshed-out and detailed; wars are fought, loved ones are lost, and the mysteries of the world become unraveled as you try to write the story of the new world.

This game has a lot of features that are quite innovative, and a couple that are a bit gimmicky. One of those gimmicks is the Code system, which is featured the most prominently. As the main character journeys across the world, through kingdoms and deserts, they can scan people and weapons with their book, titled the Book of Prophecy. Now, each person and thing in the world has a certain 'code', coloured boxes that represent their ability; for example, a timid novelist has a code composed of Illness and Cat. The main character is able to use these code pieces to change other objects and things he comes across. While humans don't actually change much, you are capable of making strong monsters weak by adding some Illness, or change your plain sword into a Mithril blade by adding enough Silver.

Each and every character, whether they be just a regular NPC or one of the story's main characters, has a backstory that affects who they are and what they do. As the main character travels across the world, looking for things to scan and the missing pages of the magic book, the player will find out more about the people living in the world. If the character progresses far enough, they might even get into a relationship with one of the many people they meet on their travels.