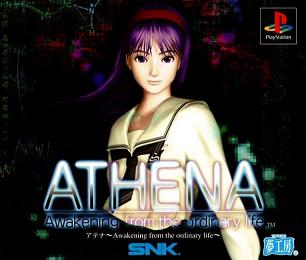 Not your typical Athena...
Advertisement:

Athena: Awakening from the Ordinary Life is a three disc Eastern RPG game developed by Yumekobo that was released in March 1999 for the Playstation console. It was released again as downloadable content for the Playstation 3 and PSP on August 28, 2007. The game's image song, "wannabe /Misty Eyes", was performed by RUMI. The game's story is notorious for being much darker than other Athena related titles.

The year is 2018 and science has progressed at an alarming rate under the Tantauls system. Dinosaurs, clones, and mecha are no longer figments of fantasy and can be constructed into reality. They regulate society to the finest detail, creating automated and technologically advanced cities on land and in sea. Yet through this government agency lies a dark conspiracy, one which mysteriously surrounds the brain waves of a school girl named Athena Asamiya. Although she believes herself to be a normal girl, her life changes dramatically once her Psychic Powers awaken. Now, it is up to her to find the truth behind her powers as well as the secrets behind Tantauls...

The game also spawned a live-action 13 episode drama series, simply titled as "Athena", which starred Kei Ishibashi as Athena. As with most games, SNK also released a soundtrack and a drama CD for the game. The drama CD has an original story that reenacts some of the game's original events. A two-part novel series written by Jyumon Yayoi was also made.

Some tropes found in Athena: Awakening from The Ordinary Life are: