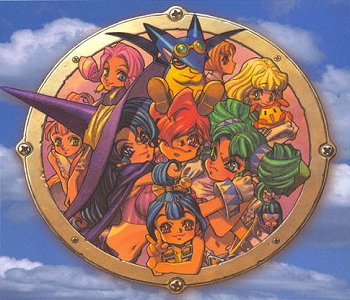 Koh and the ladies (and monster) in his life.note  In the centre: Koh, with Selfi Rode on the left and Nico Southey on the right. Around the edge, clockwise from the top: Kewne, Fur Gots, Cherrl Child, Mia Myria, Weedy, Patti Pan, Vivian Merca.
Advertisement:

The overall plot to both games is the same: you are a boy named Koh, and you live out in a desert village where a giant monster tower looms. Your father, Guy, went into the tower to find a legendary monster and hasn't been seen since, so you enter the tower to search for him, and fight/tame any monsters that get in your way.

Tropes used in Azure Dreams (for both versions unless noted otherwise):