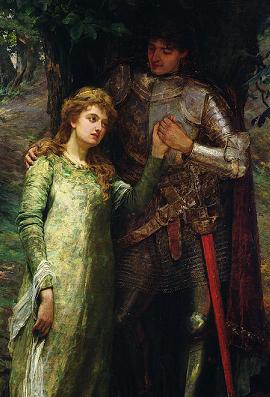 The Lady and Knight is a chivalric image that many of us probably know very well, though perhaps you didn't realize they come in two flavors. A staple in fiction everywhere, the Lady And Knight dynamic is at least Older Than Feudalism, though no doubt that whole era of Romantic adventure stories like King Arthur and Robin Hood perpetuated it. While it is very common in works set in a Medieval era or equivalent fantasy version, they can pop up anywhere but even in modern settings, they are usually meant to invoke that era's ideal image of a Lady and her Knight.

The iconic portrayal is of the Lady as a beautiful, admirable woman with dignity and nobility and The Knight as a strong, brave man of virtue sworn to protect her. The Lady And Knight, while originally female and male respectively, aren't always nowadays and either role can be played by either gender. While there is often a Bodyguard Crush involved, sometimes it's a chaste Courtly Love and in same-sex couple versions, there's less of a chance of romance being involved. In the past, the Lady was often a Damsel in Distress, but now it's nearly as common for the Knight and his Lady to form an Action Duo or Battle Couple.

There are two particular variations of the Lady And Knight dynamic: the Bright Lady and White Knight, a good version, and an Evil Counterpart, the Dark Lady and Black Knight. While the types are fairly distinct, it's not unheard of for Ladies and their Knights to switch from one to the other, should they perform a Heel–Face Turn or Face–Heel Turn. For more information about the two different types, see the Analysis page.

Often there's some sort of ceremony or official pledging, accompanied by the knight giving the Lady a kiss on the hand or kneeling. Sometimes non-historical based works will slip something similar in as a tip-off to the two characters' relationship. In settings that support actual knights being in the work, if the Knight doesn't start off as an actual Knight, he is almost always formally knighted by the end of the work.

Compare Mistress and Servant Boy which has a similar dynamic, but the Knight is less about serving and doing menial tasks and more about protecting his Lady and his honor. If the servant also happens to be a Battle Butler, however, they may overlap. If there's rescuing going on but none of the courtliness, it's a Rescue Romance.