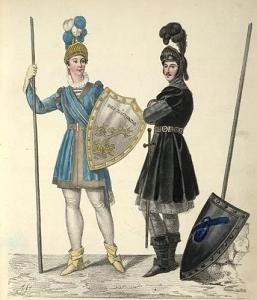 Ivanhoe and the Black Knight — Costumes for the 1828 Stage Adaptation
Advertisement:

Ivanhoe: A Romance is an 1819 historical novel by Sir Walter Scott, set in the reign of King Richard The Lion Heart and largely concerning the long-smouldering antagonism between the Normans and Saxons in the centuries after the Norman Conquest — an antagonism which, at that date, is highly anachronistic (one might call it a sort of Hollywood History) and largely the product of Scott's teeming imagination. In the face of severe criticism by his own contemporaries on this and other historical inaccuracies, Scott himself admitted, "It is extremely probable that I may have confused the manners of two or three centuries," but comforted himself that "errors of this kind will escape the general class of readers." (And to be fair, this romantic idea of early British history remained popular enough that Arthur Conan Doyle used it 72(!) years later, in The White Company, which takes place centuries after the events of Ivanhoe). Despite the author's Whig history limitations and prejudices (which are evident), Ivanhoe is a stirring and colourful tale, with plenty of action, lovable heroes and heroines and hissable villains, and a real feeling for the genuine — if extremely exaggerated — romance of The High Middle Ages.

The novel was originally something of a Pot-boiler. Scott's popularity as a poet was waning in the face of the more exotic verses of Lord Byron, and his over-gentrified lifestyle and a life-threatening bout of illness had left his pocketbook in an equally sickly condition. His Scottish novels were popular enough, but of limited appeal; Scott felt, moreover, the need for a fresher source of inspiration — so he turned to History and The Middle Ages, the object of his lifelong and devoted (if not always pedantically accurate) study. The novel won immediate, long-lasting, and deserved popularity, restored Scott's fortunes, and helped to launch the entire Historical Fiction genre.

open/close all folders
Advertisement:
Adaptations
Scott's novel has had a number of adaptations.

There have been several Film Adaptations.

There have also been quite a number of Live-Action Television adaptations of the novel:

Tropes employed by this novel (and its various adaptations) include: