Spoilers for all Halo games preceding this one will be left unmarked. You Have Been Warned! 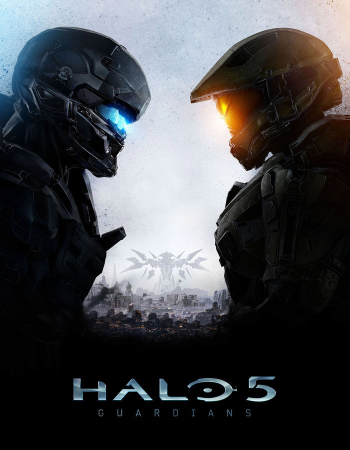 "John, the Reclamation is about to begin."
Arbiter: 117, the Master Chief. He is not your friend. Is he your foe?
Locke: He's gone AWOL, and the UNSC wants him back. I am going to bring him home.
Arbiter: I admire your sense of duty, Spartan. But if he has truly left the fold, he has his reasons.
Locke: I'm sure he does, Arbiter, and I intend to find out what they are.
—Halo 2 Anniversary
Advertisement:

Halo 5: Guardians is a direct sequel to Halo 4, and the fifth mainline game in the Halo franchise. It is developed 343 Industries and released on Xbox One on October 27th 2015.

Set one year after the events of Halo 4, Master Chief John-117 has been reeling from the death of his former AI partner Cortana, who sacrified herself to save Chief in his defeat of the Didact. While on a routine mission with his SPARTAN-II teammates titled Blue Team, he and they go AWOL following strange signals coming from deep space and admist attacks on human colonies.

In response, the UNSC assigns SPARTAN-IV Jameson Locke (a former Office of Naval Intelligence agent introduced in Halo: Nightfall) and his squad named Fireteam Osiris to track down the Chief. But as Osiris chases down Blue Team, things soon get complicated, and the discoveries that are made could potentially changer the greater galaxy forever.

On the gameplay side, Armor Abilities have been removed, being replaced by a uniform set of Spartan Abilities. Instead of customizing your combat with one particular item like a Jet Pack, Sprint Shoes or Hologram projector, you have a small scale booster pack that gives a selection of new combat movements like vaulting over a wall, sliding into cover, stabilizing mid-air firing and slamming to the ground. Additionally, teamwork plays a much larger role than in previous campaigns, since Locke and John are accompanied by their respective teams, SPARTAN-II Blue Team and SPARTAN-IV Fireteam Osiris. The player Spartan can call commands to their NPC teammates, letting them charge or hold position, target specific enemies, and switch their current weapons.

With regards to multiplayer, the game has been split into two basic modes, Arena and Warzone. Arena contains the gametypes from previous Halo games (and adds a few new ones of its own), and was designed to reflect classic Bungie-era gameplay. In fact, the loadout customization and ordinance drops introduced in Halo 4 have been completely removed in Arena; all players now spawn with the same loadout, and the focus is on controlling weapons already present on the map.

Warzone is a new unranked mode featuring two teams of twelve Spartans battling each other on large maps populated by AI-controlled Covenant and Promethean hostiles (making Halo 5: Guardians the first Halo FPS to have Player Versus Environment elements in its PvP multiplayer). A team wins by being the first to accumulate 1000 points, which can be done by either simply killing opposing players and enemy AI, or by capturing all the bases on the map and destroying the enemy team's core. There is also a variant with no AI enemies, Warzone Assault, where one team has to defend the bases and the other one tries to capture them, similar to Invasion from Halo: Reach. Later DLC also re-added Firefight, the cooperative-based Player Versus Environment mode originally introduced in Halo 3: ODST.

Additionally, the multiplayer has a new Requisition system; after every match in both Arena and Warzone, the player earns REQ points which s/he uses to purchase REQ packs which unlock various loadouts, weapons, vehicles, armors, skins, etc. While Arena for competitive balance reasons only allows the use of cosmetic requisitions, Warzone's gameplay is very much based around requisitioning power weapons, vehicles, power-ups, etc; however, each new match requires the player to build up their energy level from scratch before they can use requisitions of an equivalent level. REQ packs can also be purchased with real-world money.

The game involved an open beta in December-January 2014/15 for 3 weeks, one of the longest and earliest betas ever done before launch. In addition, a 2015 ad campaign titled HUNT the TRUTH ran from late March to near the end of October, and includes a series of live action videos and voice clips. It can be found here

. This is also the first non-spin-off Halo game to receive a T for teen rating instead of a M for mature from the ESRB.

The game series is continued with Halo Infinite.