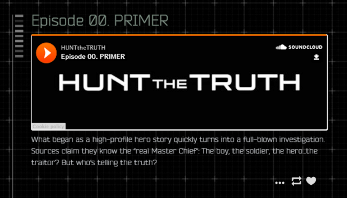 Hunt the Truth (sometimes stylized #HUNTtheTRUTH) is a 2015 Alternate Reality Game that served as advertising for Halo 5: Guardians. It can be found on Tumblr here

, and is published through a series of photo blogs and audio journals.

In 2558, six years after the end of the Human-Covenant War and one year after the events of Halo 4, former propaganda journalist Benjamin Giraud (Keegan-Michael Key) is hired by the Office of Naval Intelligence to write a biographical article on legendary Super Soldier John-117, the Master Chief himself. Giraud enthusiastically signs up for the job, and is being paid well to interview exclusive witnesses who claim to have known John since his childhood. But as Giraud does his own investigating on the side, he finds that the stories he's hearing don't match up with the evidence. Soon Giraud finds himself doubting everything ONI's been telling about the Master Chief, and sets out to discover the truth, even if it's not the heroic story he wants to believe.

A second season ran from September 22 to October 26 of 2015, ending just before the release of Halo 5: Guardians. It follows the story of FERO, the recurring Insurrectionist Leader from Season One.

Hunt the Truth provides examples of: