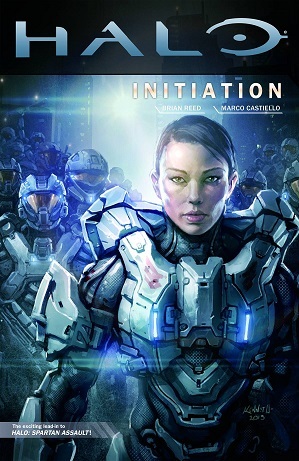 Halo: Initiation is a 2013 three-part comic series published by Dark Horse Comics set in the Halo universe. Set just around the end of Halo 3, the series serves as a lead-in to both Halo: Spartan Assault and Halo 4's Spartan Ops campaign.

Humanity's war against the Covenant has just ended, but its troubles are far from over, as Covenant remnants and human Insurrectionists alike seek to destroy the UNSC. In response, Spartan-II washout Musa-096 decides to create a new generation of Super Soldiers, the Spartan-IVs, with Edward Davis and former ODST Sarah Palmer among the elite few selected for the program's first class.

However, the UNSC isn't the only group trying to upgrade its forces; an Insurrectionist group known as the New Colonial Alliance plan to steal the UNSC's new flagship Infinity for themselves, with the only people standing in their way being Palmer, Davis, and a few other rookie Spartan-IVs.