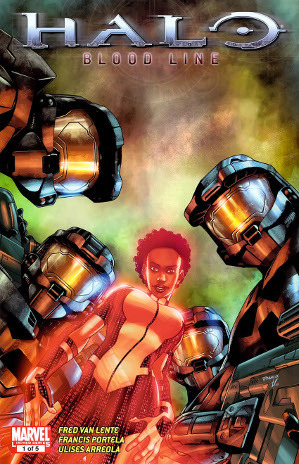 Halo: Blood Line is a 2009-2010 five-issue comic series set in the Halo universe and published by Marvel Comics. It was written by Fred Van Lente, and centers around a squad of Spartan-IIs known as Team Black (making their return from Halo: Evolutions's Blunt Instruments).

In late 2552, an undercover UNSC vessel and a Covenant ship have their respective missions both go awry as the two ships' slipspace jumps are interrupted. The ships then are shot down by an old Forerunner defense system, which has still been active in the past hundred millennia. Only the Spartans and a handful of Covenant survive, but their war has to be put on hold after Forerunner machines kidnap some of their teammates. Forced to make an uneasy alliance, Spartan Team Black and the Covenant crew must come to grips with their enmity, not just towards each other, but even their own teammates.