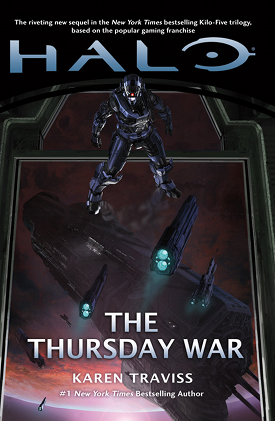 Halo: The Thursday War is a 2012 novel set in the Halo universe, and the second part of Karen Traviss's Kilo-Five Trilogy. Following the events of Halo: Glasslands, Evan Phillips attempts to keep alive after surviving a surprise attack by Brute rebels, ONI tries to handle the ever increasing tension between the Arbiter and the forces of the zealous Avu Med 'Telcam, and Jul Mdama contemplates how he might escape his confinement on the Shield World Trevelyan. These conflicts lead up to the events on Requiem in Halo 4, while the storyline of the trilogy itself is followed up in Halo: Mortal Dictata.