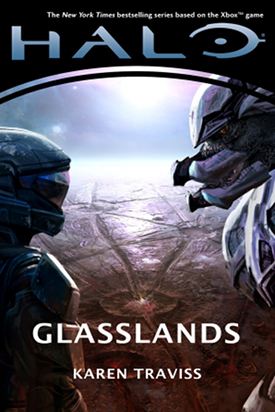 Halo: Glasslands is a 2011 novel by Karen Traviss set in the Halo Expanded Universe. It is the first part of the "Kilo-Five trilogy" set in the months after the events of Halo: Ghosts of Onyx and Halo 3, in which Humanity and the Sangheili, no longer at war, are picking up the pieces from the Great Schism. It revolves around the continued adventures of: Dr. Halsey, CPO Mendez, and the Spartans in the Onyx Shield World; ONI agent Serin Osman, a team of ODSTs, and Spartan-II Naomi, who find themselves on a mission to destabilize the fragile government on Sanghelios; and a group of Sangheili hoping to overthrow the Arbiter and eventually continue their war with humanity.

A sequel and the second book in the Kilo-Five trilogy, titled Halo: The Thursday War, was released on October 2, 2012.