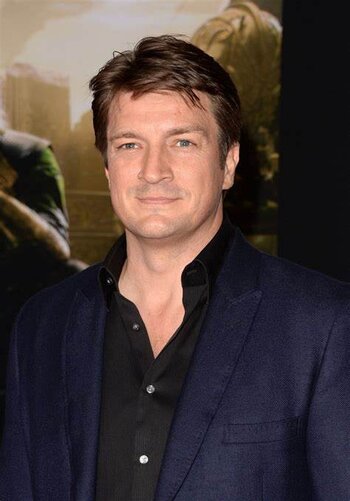 Time for me to Drive to my Castle so I can experience some Serenity watching Buffy the Vampire Slayer. It's my Destiny 2, yet these are A Series of Unfortunate Events.
"I'm a dork. I collect comic books. I still love cartoons. I'd rather be at home on a Friday night playing D&D than hanging out in some loud, overcrowded club. My sense of humor is that of a geek. My likes and dislikes are those of a geek. I've memorized the dialogue of every crappy sci-fi movie there is, but I still haven't seen Schindler's List."
— Nathan Fillion
Advertisement:

Nathan Fillion (born March 27, 1971 in Edmonton, Alberta) is a Canadian TV and movie actor who started off in the soaps. Since then, he's moved on to a number of famous roles. A few of his characters can be morally questionable or bordering jerkass territory, but he's a really nice guy in person. And quite a comedian.

The first of those roles earned him most of his recognition, despite the short run of the series. Numerous bit parts include cameos as Buck (again) in Halo: Reach, a Sgt. Reynolds in Halo 3, James Frederick Ryan in Saving Private Ryan, and Kate's ex-husband in Lost. Before that, BioWare had him voicing Gao The Lesser in Jade Empire. He also voiced Vigilante in Justice League Unlimited.

He was also used as Hal Jordan

in a fan trailer for the proposed Green Lantern film, which he thought was awesome. He wasn't actually cast in Green Lantern (2011), but he was cast as Hal in the 2011 direct-to-DVD Green Lantern: Emerald Knights. He reprised the role in Justice League: Doom, Justice League: The Flashpoint Paradox and The Death of Superman. Similarly, he was in talks to play Captain America, but the role went to Chris Evans. However, he did end up playing a superhero (well, a satirical one anyway) known as The Holy Avenger in Slither director James Gunn's second film Super. He began a Viral Marketing campaign to get himself the role of Nathan Drake in an Uncharted movie, which he did not get, but the fan film shows us how that would've played out.

Regarding Firefly, he said in a interview

that if he had $300 million, he'd buy the rights to Firefly and make it his own. This being the internet, a brief but passionate movement sprang up to help him do such a thing, but it fell apart due to a lack of official support from Fillion himself and/or Joss Whedon.

When asked at a convention what Fox would have to do to make the cancellation up to him, he said Fox would have to buy a private island, get a cruise ship to take a bunch of Firefly fans there, and build a life-size replica of the ship so he and the fans could act out scenes on it. Needless to say, he loves the show as much as any of the fans do.

and is very good at making Memetic Mutation Catch Phrases such as "Bam, said the lady" and "Feed the birds." Both have had cameos on his hit show Castle (as well as "Double Rainbow", a meme that he didn't start.)

He's also One of Us. Con-goers pass around a story where a few friends sat down for some Firefly pen-and-paper action. Nathan approached the table and purportedly requested to play as... River. His interactions with fans extend online as well, as evidenced in the following: In early August of 2012, he conducted a question-and-answer session on

that it is/was really him.

Some other geek facts:

Bizarrely, he has been mistaken for Jason Bateman several times by both normal people and celebrities alike to the point where it is a Real Life Running Gag. But of course, Nathan takes no offense to it and continues documenting the instances where it happens because he's just that awesome. It might help that on one of those occasions it got him out of a speeding ticket.

Tropes Associated with his involved works and characters: