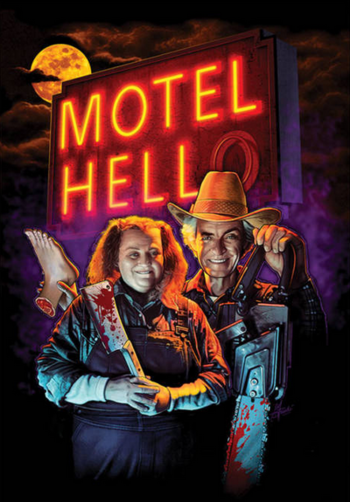 Motel Hell is a horror comedy film from the year 1980. It was directed by Kevin Connor and stars Rory Calhoun (Night of the Lepus), Nancy Parsons, Nina Axelrod and Paul Linke. John Ratzenberger also appears in a bit part.

The film centers around Motel Hello, which is run by sister and brother duo Vincent and Ida Smith. They have been killing people and turning them into meat pastries to lure in customers, which has been working fine for over three decades. The man-to-food process works thusly: They bury their victims neck-deep into a hidden field, where they are forcefed for a while until they are dug back up and are taken to the Smiths slaughterhouse.

One day, Vincent causes a passing pair riding a motorcycle to crash. As he is taking them back to his farm, he takes a liking to Terry, female passenger of the duo. He fabricates a story that she and Bo, the rider, had an accident and he had to bury the deceased Bo (half of that statement is true) to the graveyard. Having no place to go, Terry decides stay in the farm as she is also starting to fall for her "rescuer". Vincent's little brother, Sheriff Bruce Smith, also falls in love with Terry, thus complicating the matters as the truth about the motel is coming closer and closer to the light.

A remake for the film is in Development Hell, with Arthur C. Miller (Automaton Transfusion) currently attached to do the directing. The movie was also loosely adapted into a 3-issue comic miniseries of the same name by IDW Publishing which released in 2011 as part of their short-lived Midnite Movies label.