Film / Moscow Does Not Believe in Tears 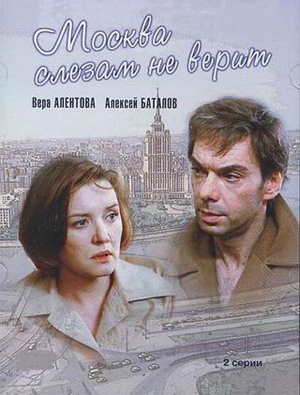 Москва слезам не верит.
Moscow Does Not Believe in Tears (Москва слезам не верит, Moskva slezam ne verit) is a 1980 Soviet dramedy film directed by Vladimir Menshov about the lives of three provincial girls who come to Moscow for work. Katya (Vera Alentova) is a working-class girl who lives in a worker's dorm, but is studying for exams that will get her into university. Her roommate Antonina has fallen in love with a farmer's son, while her other roommate Lyudmilla is much more cynical, scheming to find a professional man that she can entrap in marriage.
Advertisement:

When Katya is asked by some cousins to housesit their fancy apartment, Lyudmilla hits on a scheme to pass herself and Katya off as a professor's daughters, and thus draw the attention of some eligible bachelors. They host a dinner for some single men, which ends up with Lyudmilla landing Gurin, a handsome young hockey player, while Katya pairs off with Rudolf, a cameraman with Russian state television. Rudolf gets Katya pregnant. He is then called to Katya's factory to film a news segment, and thus finds out that she is pregnant and she lied to him about being an upper-class university student. He then dumps her, and leaves her to have the baby alone. Katya has a daughter she names Alexandra.

Time Skip twenty years, and Katya has moved up in the world, and now is manager of the factory where she used to work. However she is still single and lonely, until she finds a completely unexpected romance with Gosha (Alexsey Batalov), a taciturn yet affectionate blue-collar worker (a tool-and-die craftsman). Gosha moves in with Katya and Alexandra, and everyone is happy until Rudolf shows up again, once more bringing misery into Katya's life.

Moscow Does Not Believe in Tears is so iconic as a representation of the Russian soul (“russkaya dusha”) that, when Paige's mom wanted to indoctrinate her as a Russian spy on The Americans, they watched this film. Meanwhile, according to Russian Film Hub

, the film is so emblematic of the Russian soul that then American President Ronald Reagan watched the movie “at least eight times” before he first met his Soviet counterpart, Mikhail Gorbachev. This iconic film has also received great critical acclaim. Along with War and Peace, Dersu Uzala and Burnt by the Sun, Moscow Does Not Believe in Tears is one of four Russian-language films to win the Academy Award for Best Foreign Language Film.