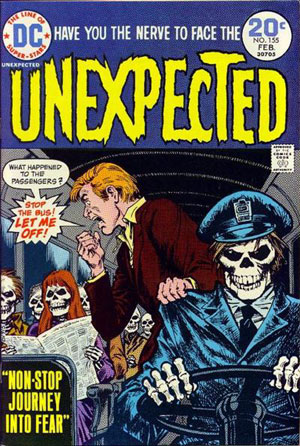 When our heroes explore the remains of an old and long since abandoned craft they may discover to their shock and surprise, as the light of their lamps fall upon the members of the craft's crew, that they are still dutifully manning their stations as skeletons or mummified corpses.

It may be the wreck of a sunken ship on the ocean bottom, a Japanese WWII submarine stranded on a lone island, a derelict drifting through the endless night of outer space, a small plane caught high above the ground in the trees of the jungle or may take many other forms. It will often be a military craft of some sort or other. This means that the crew will be clad in the recognizable remains of their uniforms. Pilots will still be strapped in their seats. The helmsman will still be at the wheel. The Captain will be at the center of The Bridge sitting in the captain's chair surrounded by his Bridge Bunnies as he was in life. Often he will be wearing a captain's hat and some spider webs for decorations.

When the heroes approach them from behind the life like poses, durable uniforms, and the back of the captain's chair can create the short-lived illusion that the crew is actually still alive before the ghastly truth is revealed. Recoiling in horror from that revelation, a clumsy hero might end up knocking over another crewman, who collapses from a life-like pose to a pile on the ground. In space, with everyone wearing spacesuits, the illusion can be especially vivid with only the skull inside the helmet giving it away.

The important distinction that defines and separates it from just finding a craft with some human remains in it is the fact that the dead crew is mostly found in the same places and poses that the would have been in life, showing few if any signs of having panicked or fought their fate. Either that, or they died too quickly to react.

It is also important to note that the crew in those cases is most definitely dead and not just mostly dead or undead. In the latter case, it's Dem Bones.

If the reveal provides a Jump Scare, see also Peek-a-Boo Corpse. If you're looking for the more figurative meaning of the term, that's under Crew of One or Critical Staffing Shortage.

If you're looking for a 1990s video game, click here instead.