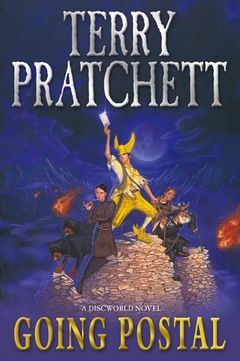 Neither rain nor snow nor glo m of ni t can stay these mes engers abo t their duty.
"Run before you walk! Fly before you crawl! Keep moving forward! You think we should try to get a decent mail service in the city. I think we should try to send letters anywhere in the world! Because if we fail, I'd rather fail really hugely. All or nothing, Mr. Groat!"
— Moist Von Lipwig
Advertisement:

The 33rd Discworld book, Going Postal centers around the character Moist von Lipwig, a new main character for the Discworld. A self-admitted con man, the book opens with Lipwig (under the pseudonym Albert Spangler) awaiting execution, because he finally got caught. Albert Spangler is hanged, buried, and gets a nice little paragraph in the Tanty Bugle.

Moist von Lipwig, however, wakes up in Lord Vetinari's office, receives a pleasant speech about the nature of angels, and is "offered" a job as the new Postmaster in charge of the now-defunct Ankh-Morpork Post Office. True to form, the first thing he does once he's loose is to run as far away as he can. The next morning, he wakes up when the golem Vetinari set as his parole officer crashes through the door, bodily picks him up along with the horse he acquired, and carries them both back to Ankh-Morpork.

Despite the complete incompetence of the existing Post staff,note (Stanley Howler, a slightly deranged boy obsessed with pins, and Tolliver Groat, an old man who believes very strongly in his homemade medicines) Moist manages to begin rebuilding the Post Office via the application of a liberal helping of Refuge in Audacity. It helps that the Grand Trunk clacks system note a semaphore tower chain which allows messages to be transmitted great distances very quickly is under new management, a gang of voracious corporate backstabbers who are running it into the ground. Moist's rivalry with Reacher Gilt, the leader of the corporate moneygrubbers, and his budding romance with Adora Belle Dearheart note a cynical, chain-smoking young woman who has been known to drive her spike-heeled shoes through people's feet when provoked provide a bit of backdrop as Moist essentially invents a new system of currency,note by introducing stamps, which people start to use instead of coins single-handedly restores the Ankh-Morpork Post Office, rescues a cat (and two men) from a burning building, summons divine intervention, and exposes the crooked dealings of Gilt and his accomplices to the world.

Did we mention that Moist is a really big believer in Refuge in Audacity? And that he saved a cat?

Preceded by Monstrous Regiment, followed by Thud!. The next book in the Moist von Lipwig series is Making Money.

Not to be confused with Going Postal, which is a trope.