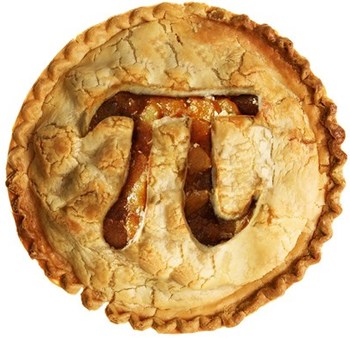 They said, "Would you like some pi?". I said, "Yes, I would." I forgot they majored in math. I would undo it if I could.
— Songdrops, "The Pi Song"
Advertisement:

Pi, the number, is known for many things: being infinite, being the ratio of the circumference to the diameter of all circles, and... being the homophone of a food.note In English, that is. Not so in many other languages, such as Modern Greek or Russian, whereupon it's pronounced as "pee". But since everyone speaks English...

This is, basically, any pun on the words "pie" and "pi". It's a good excuse to be both nerdy and intellectual, but at the same time silly and jokey. Perhaps a scientist calculating pi is followed by someone (who could be The Ditz and/or a Big Eater) asking where the pie is, or perhaps someone is made hungry by talk of pi. If a character deliberately makes a joke about pi, they're often a quirky scientist or an Extraverted Nerd.

It might also be a visual joke, such as a pie with the pi symbol written on it, or just a good old-fashioned pun, such as someone saying that math is "easy as pi".