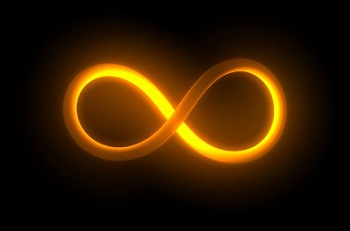 You could say it's... loopy.
"Figure eight as double four,
Figure four as half of eight.
If you skate, you would be great
If you could make a figure eight.
That's a circle that turns 'round upon itself...
Place it on its side and it's a symbol meaning Infinity..."
— Schoolhouse Rock!, "Figure Eight"
Advertisement:

When a big number just isn't BIG enough, writers turn to the Infinite. Rarely do writers touch upon on its immeasurable nature, sometimes even assigning it to something that's just really large. The most horrendous use is when a writer implies something may be More Than Infinite, which again makes no sense because infinity is a limitless value, not a number that you can add to.

See all related Number Tropes, which can't possibly compare. You can however, compare a Mouthful of Pi, which is Infinite in its own way as it goes on and on and..., well, you get the idea. And if you were wondering, that sideways 8 thing is called a lemniscate.

If you were looking for the Tabletop Game, you can find it here. Also not to be confused with the Korean boy band with the same name. Or the villain from Sonic Forces.